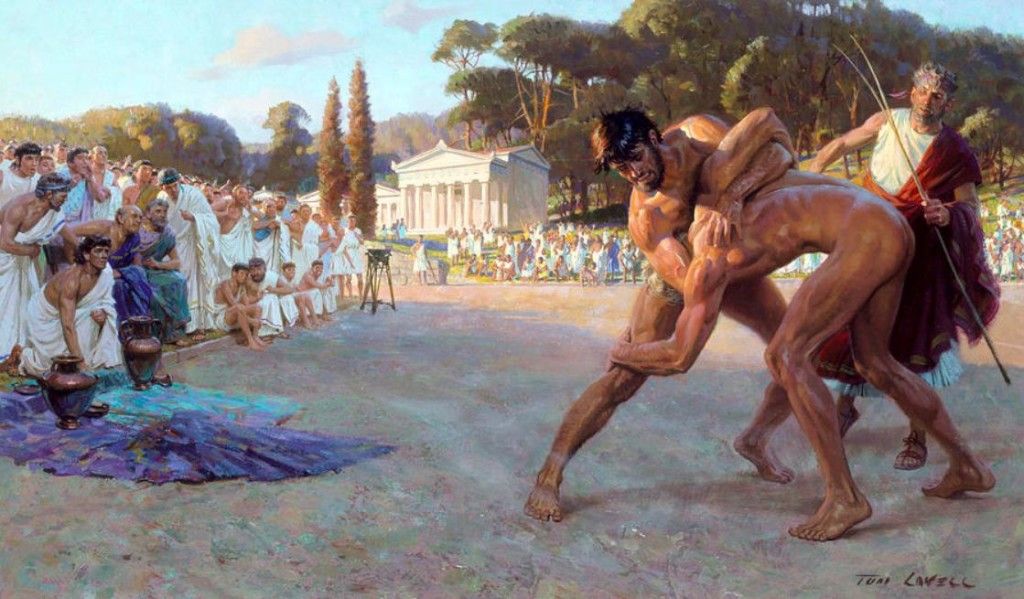 The Origins of MMA or Mixed Martial Arts (MMA) is a hybrid combat sport incorporating techniques such as boxing, wrestling, muay Thai and various other disciplines. It was considered to be the combat sport of ancient Greece dating back to 648 BCE. There were only two rules; No biting and no gouging the eyes, nose, or mouth. That was it! A match ended only when a fighter acknowledged defeat or was rendered unconscious. In some cases, competitors even died during a match.

The sport was banned from the Olympics Games in 393 CE by the Roman emperor Theodosius I. The sport made a resurgence in Brazil in the 1920s with fighting sideshows called “vale tudo”.

Enter in the UFC

A huge breakthrough occurred in 1993 when UFC 1 (Ultimate Fighting Championship) debuted on Pay-Per-View in November of that year. The UFC is sometimes credited for The Origins of MMA. It began as a no-holds-barred, eight-man tournament. Bouts ended by submission, unconsciousness, referee stoppage, or their corner threw in a towel declaring defeat. Royce Gracie, Son of Brazilian Jiu-Jitsu godfather Helio Gracie was the winner of the first UFC. It drew only 86,000 PPV purchases, but UFC 2 which was held 6 months later drew 300,000 PPV purchases.

To date, the highest-paid UFC event was UFC 229. It was held in October of 2018 and raked in a cool $2.4M in PPV buys. The numbers show just how much the sport has grown over the past two decades. As a result, there has been a plethora of martial art forms to surface since the first UFC. From boxing to capoeira, the sport has a massive variety of styles. Below is a list of a few of the most popular styles in MMA. You decide if UFC should be credited for the Origins of MMA.

Brazilian Jiu Jitsu is a technique based on grappling, ground fighting and submission holds. It focuses on the skill of taking an opponent to the ground and using a number of techniques to force them into submission via joint locks or chokeholds. Founded around 1920 by Brazilian brothers Carlos and Oswaldo Jr. it is one of the most recognized techniques in MMA.

Muay Thai is a form of close quarters combat utilizing eight points of striking (fists, elbows, knees, and shins). Originating from Thailand, Muay Thai can be traced back to the middle of the 18th century. Just watch the 1989 blockbuster “Kickboxer” and it will be impossible for you not to love this form of martial arts.

Greco-Roman wrestling was founded in the early 19th century in France. It is a style of wrestling that is practiced worldwide. It has been in the summer olympics since 1904 and has been in the games ever since. This style of wrestling forbids holds below the waist which is the main feature that differentiates it from freestyle wrestling. Many MMA fighters utilize this form of martial arts to get their opponent on the ground and blast them with a combination for elbows and punches to either get their opponent to tap out, have the referee stop the onslaught or knock their opponent unconscious.

0
0   0
previous Bare Knuckle Fighting Championship- Is the Original Form of Boxing Making a Comeback?
next How to properly wrap your hands.